Doctorate of a »dreadful jurist«

Institutions like universities and research institutes like to adorn themselves with the names of outstanding personalities in their history. One such example is the former professor and poet of human freedom, Friedrich Schiller, whose name the University of Jena has carried since 1934. By contrast, it is difficult to deal with members who do not give credit to their universities, such as those who have strayed from the right path. One prominent example from Jena’s university history is Roland Freisler, who would later become the President of the People’s Court in Nazi Germany. 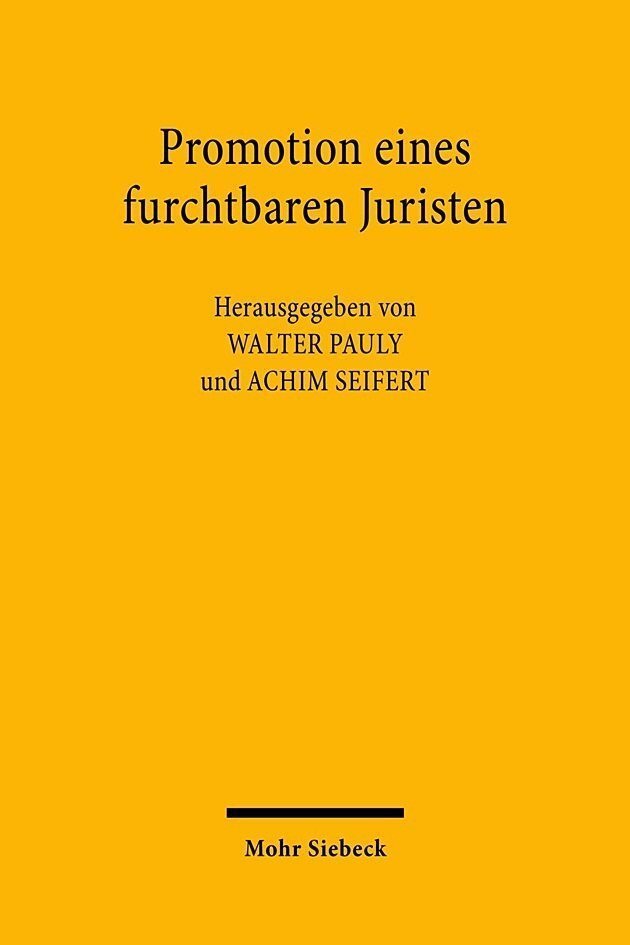 The front cover of the book on Roland Freisler, which was published in May 2020 by the legal scholars Walter Pauly and Achim Seifert from the University of Jena. Picture: Mohr Siebeck GmbH & Co. KG

How did Freisler become a fanatical Nazi jurist?

A commission from the Faculty of Law at the Friedrich Schiller University Jena has taken on the task of investigating and documenting Freisler’s time at the University of Jena.

The commission invited the historian Thomas Clausen to Jena in May 2018. Clausen is doing his doctorate under the tutelage of Christopher Clark in Cambridge. The subject of his thesis is »Roland Freisler (1893-1945): An Intellectual Biography«. When he was in Jena, Clausen presented his work on the »dreadful jurist«, a term used by the late German author and playwright, Rolf Hochhuth. His presentation forms a central part of the book »Doctorate of a Dreadful Jurist«, which was published by professors Walter Pauly and Achim Seifert from the Faculty of Law at the University of Jena.

The key question asked by the authors is how Freisler ultimately became the man he was and what role was played by his education at the University of Jena. Their conclusion is somewhat sobering: There clearly isn’t a universal formula to stop graduates from drifting to extremes! However, a decisive contribution to Freisler’s political views seems to have been made by his doctoral supervisor, Justus Wilhelm Hedemann. The civil and commercial jurist wasn’t fit for battle himself, but he was one of the most vociferous supporters of the war amongst Jena’s professors. The ties between Freisler and Hedemann lasted well beyond their teacher-student relationship.

After a brief stint as a moderately successful lawyer, Roland Freisler became a fanatical Nazi jurist. After joining the Nazi Party at an early stage, the conflation of right and wrong soon became his trademark. He played an inglorious role as the President of the People’s Court, especially in the show trials against the conspirators of 20 July 1944. He died following a heavy air raid by the US Air Force on 3 February 1945.

History as the deliberate unsettling of oneself

A profound examination of our history often leads to new and sometimes painful insights. This is especially true of National Socialism, the Holocaust and other extreme crimes committed during the Second World War, which were demanded by the Germans and facilitated by society despite resistance from the minority. How should our past be addressed sensibly in the present? What forms of historical representation are politically, educationally and aesthetically appropriate? Why is »remembering« no longer the ideal path to German self-enlightenment? Such questions have been asked by the historian, history education expert and psychoanalyst Volkhard Knigge since the early 1990s, and he has provided succinct answers in interviews, speeches, essays and interventions. He was the head of the Buchenwald and Mittelbau-Dora Memorials Foundation and has held the Professorship for History in the Media and the Public Sphere within the Institute of History at the Friedrich Schiller University Jena since 2008. After retiring in May, his thoughts and achievements as a scientist and university professor have now been honoured in an evocative book: »Our unsettling history. Concepts for the historical understanding of the 20th century«.

Knigge’s texts in the late 1980s were a clear reflection of his approach, demonstrating a constant focus on mediation: in his school classes, his education with the help of historical artefacts and his reflections on art and literature. One of Knigge’s most passionate concerns was the appropriate handling of remains and monuments at historic sites. Whenever such relics are restored and conserved, they should be presented in such a way that »they do not prevent people from using their own imagination for historical events, but promote the development of such imagination«, as explained in a book contribution on the Buchenwald memorial.

Knigge refers to the sites of former concentration camps to show how society tried to come to terms with the past in both East and West Germany. While the historical-political interpretation of »dying and fighting to victory« became the guiding principle for communistic monuments in East Germany in the 1950s, politicians in West Germany literally let grass and trees grow over the places where thousands of prisoners died with forest cemeteries, such as in Bergen-Belsen.

Memory needs knowledge and a sense of values

Volkhard Knigge has not only assisted in the struggle to interpret crimes committed by an entire society, but also offered constant food for thought and debate, demanded clarity in the use of terminology and become a key figure in Germany and beyond. Knigge’s concepts revolve around the concern that the growing institutionalization of commemoration is leading to the emergence of merely formulaic routines.Because these crimes, which remain unforgivable, permanently disconcert people, the historian has described the goal of historical learning in Germany as the »deliberate unsettling of oneself«. However, the »negative memory« that consequently arises isn’t a burden, but offers reasons and foundational knowledge in a joint effort to create a better and more just life for everyone. His guiding principle is that «we need knowledge and a sense of values to remember».

Some of the most touching contributions to the book are the texts about the writers and Buchenwald survivors Jorge Semprún and Imre Kertész. Volkhard Knigge describes both as witnesses who portray the horrors they have experienced themselves in their art, thereby sounding out the depths of human capabilities and willingness.

The 48 contributions to the book were selected and arranged by Axel Doßmann, who has long worked on Volkhard Knigge’s Chair for History in the Media and the Public Sphere at the Friedrich Schiller University Jena. A register facilitates systematic access to the oeuvre.